How Joplin Came to Be 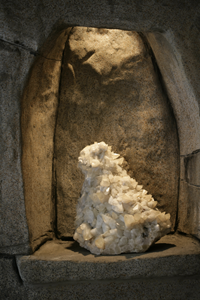 Lead was discovered in the Joplin Creek Valley before the Civil War, but it was only after the war that significant development took place. By 1871, numerous mining camps had sprung up in the valley and resident John C. Cox filed a plan for a city on the east side of the valley.

Cox named his village Joplin City after the spring and creek nearby. The namesake comes from the Reverend Harris G. Joplin who founded the first Methodist congregation in the area in mid-century.

Carthage resident Patrick Murphy filed a plan for a city on the opposite side of the valley and named it Murphysburg. While the nearest sheriff was in Carthage, a sense of lawlessness abounded in the town. This time is referred to as the "Reign of Terror."

The cities eventually merged into Union City, but this merger was found illegal and the two cities split. Patrick Murphy then suggested that the town become Joplin. They merged again on March 23, 1873, this time permanently, as the City of Joplin.

The Town that Jack Built

While Joplin was first put on the map by lead, it was zinc, often referred to as "jack," that built the town. With the railroads passing through the area, Joplin was on the verge of dramatic growth.

By the turn of the century, Joplin was quickly becoming a regional metropolis. Construction centered on Main Street, with many bars, hotels, and fine homes nearby. Joplin's House of Lords was its most famous saloon, with a bar and restaurant on the first floor, gambling on the second, and a brothel on the third.

Trolley and rail lines made Joplin the hub of southwest Missouri and, as the center of the tri-state district, it soon became the lead and zinc capital of the world.