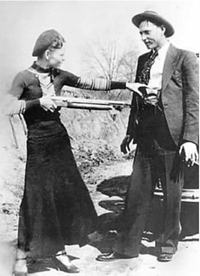 In 1933, infamous outlaws Bonnie and Clyde spent several weeks in a garage apartment in Joplin and robbed several area businesses. Tipped off by a neighbor, Joplin police attempted to apprehend Bonnie and Clyde.

Bonnie and Clyde escaped, killing Newton County Constable John Wesley Harryman and Joplin Police Detective Harry McGinnis in the process. However, they were forced to leave most of their possessions behind, including a camera.

The film in this camera was developed by the local newspaper, the Joplin Globe. The rolls of film contained the now-legendary photos of Bonnie holding Clyde at mock gunpoint and of Bonnie with her foot on a fender, pistol in her hand and cigar in her mouth.

The Missouri Advisory Council on Historic Preservation nominated the house at 34th Street and Oak Ridge Drive for inclusion on the National Register of Historic Places on February 13, 2009.